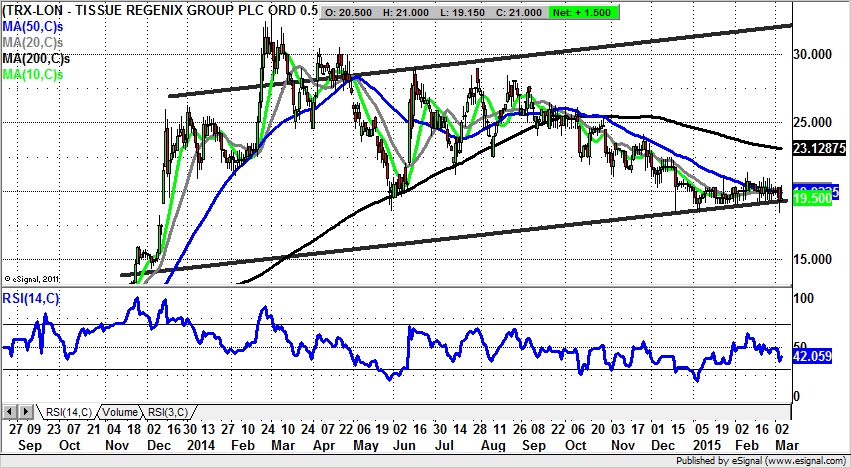 What is interesting regarding the near term price action at Tissue Regenix (LON:TRX) on its daily chart is the way that on its own one would probably be equivocal at best regarding the prospects of a return to bullish form. This is even though in the post May period we have seen no less than three probes for support towards the 18.52p support of that month, coming in the form of bear trap rebounds in December and to start March. But the key to the conundrum actually stems from a December gap to the upside from the end of 2013. Here the floor of the gap was at 18.25p, with the most telling aspect for the bulls being that the price action has been so strong that the stock has not filled this feature to date.

This “failed gap fill” is a buy signal, with the implication being that while there is no end of day close back below the gap floor one should assume the pullback of recent months is a positive consolidation and will lead to a new leg to the upside. The preferred scenario is that a new rally will begin in earnest with a weekly close back above the 50 day moving average now at 19.9p;. The initial target at that point would be the 200 day moving average at 23.12p over the following month, with a return to last year’s best levels above 30p in focus in H2 2015.

Subscribe to our FREE News Alerts – Click to select your preferences
Share this post using our forum friendly shortlink: http://bit.ly/1DRI8bf
Disclaimer: Statements in this article should not be considered investment advice, which is best sought directly from a qualified professional.

Click the EPIC TRX to read the full archive for this company.

Tissue Regenix Group Plc Addressing woundcare in the US

Tissue Regenix Group Plc From development – into the commercial world