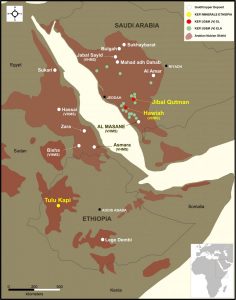 As the operator of these joint-venture projects, KEFI Minerals is well positioned to develop these projects prudently while continuing to add value through further exploration.

Planned gold production at Tulu Kapi is forecast to be circa 115,000 ounces per annum at an AISC of US$742/ounce over nine years.

Our aim is to create wealth for our shareholders by developing into profitable mines the gold and base metal deposits that the Company has discovered or acquired in a cost-effective manner.

Since KEFI Minerals was formed in 2006, we have rapidly evaluated and relinquished a number of exploration properties as well as acquiring new projects.

The highly prospective Arabian-Nubian Shield has been the Company’s primary focus since 2008 when it commenced exploration activities in the Kingdom of Saudi Arabia.

Our prudent approach is exemplified by the cost-effective acquisition of the Tulu Kapi project in the Democratic Republic of Ethiopia in late 2013. The £4.5 million cost of acquiring 75% of this advanced project equates to only $10 per reserve ounce and provides the information collected from historical expenditure of more than $50 million.

KEFI Minerals is now positioned as the operator of two gold development projects as well as a cost-effective explorer of its portfolio in the highly prospective Arabian-Nubian Shield.

With the appropriate mix of technical and financial expertise, the Company is prudently progressing its projects into profitable gold production with the aim of returning value to shareholders.

Copper gets its turn in metals spotlight