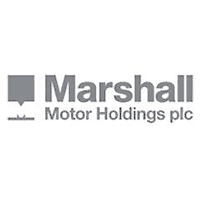 Marshall Motor Holdings plc (LON:MMH) Chief Executive Officer Daksh Gupta and Chief Financial Officer Richard Blumberger caught up with DirectorsTalk for an exclusive interview to discuss the highlights of their interim results, balance sheet post IFRS16, good margin performance and the outlook for the rest of the year & beyond.

Q1: Interim results just out for the 6 months ended 30th June. Daksh, it was another good performance in what you call a challenging market, what were the highlights of the half?

A1: I think market conditions across the UK were indeed challenging, the new retail, new fleet and used car markets all declined. However, despite operating with this backdrop, I’m delighted to report that we grew our like-for-like revenues to £1.16 billion and the Group, once again, outperformed the market across all core KPI’s.

In terms of used cars, our unit sales performance was standout and built on our strong performance in the second half of the year and we enjoyed our best-ever performance here with like for-like unit sales up 7.2%. An excellent performance when you consider the market is forecast to decline by 2% this year.

Now, the used car market did experience some margin pressure in Q2, however we were able to mitigate this with an excellent new car margin performance which helped us maintain our strong margin at 11.4%.

Operating profit came in at £20.2 million with underlying profit before tax coming in at £15.2 million and this was a good result considering market conditions and in line with our expectations.

Another highlight of the period was cash, we closed the period with an adjusted net cash position of £5.8 million and that’s before the impact of IFRS16 and that’s just by several investments made during the period.

During the half, we completed two acquisitions which added six Skoda retail centres making the Group the largest Skoda retailer in the UK for the brand.

The Group was also ranked, for the 5 year running, in the UK’s best workplaces, something a small number of companies have ever achieved and this was recognised by the Great Place to Work Institute.

Finally, the Board has approved an interim dividend payment of 2.85p which is up 32.6% on the prior year.

Overall, a great performance considering how challenging the market’s been.

Q2, Richard, Daksh mentioned your cash position and investments made, can you talk to us about this and how the balance sheet is looking post IFRS16?

A2: As CFO, I’m really pleased with our cash position, as Daksh just said, our net cash position is £5.8 million, that’s £10.8 million up from the end of last year. That’s despite spending £6 million to settle all historic define benefits pension liability which we flagged previously, £3.5 million on two acquisitions which we announced earlier in the year, a further £8.8 million invested in capital expenditure of which £7.8 million was cash outflow in the half and that includes the £1.7 million freehold acquisition of Northampton Skoda site. Finally, as a result of our revised dividend policy announced at the end of the year, dividend payments to our shareholders increased by £1.7 million.

Before I talk about the balance sheet, it’s just worth touching on IFRS16. The standard came into effect for all companies reporting under International Financial Reporting Standards for accounting period starting after 1st January this year. Therefore, the Group has applied IFRS16 for the first time in these accounts and we have used the fully retrospective method and what this means is we’ve restated last year’s accounts assuming that we are accounting under IFRS16 which will allow for comparability.

Operating lease rental charges in the consolidated statement of comprehensive income are replaced by interest charges and depreciation expense. The timing of the recognition of these lease cost changes with increase costs being recognised in the early years of the lease due to interest being recognised at a constant rate on the carrying value of the lease liability.

Just as a reminder, this accounting standing has no affect on the Group‘s economic activity nor does it affect cash flows although it will affect reported net debt. However, due to the current immaturity of that operating lease portfolio, it will have a small negative PBT impact in the early years.

As a result of these changes, we will see reported net debt increase by around £88 million at the half year, this does not impact our covenants, they will be measured on a frozen gap basis and we will show an adjusted net debt position in our accounts excluding the impact of this.

In terms of the balance sheet, again, I am really pleased. We closed the period with net assets at £200.7 million, that’s up £6.6 million from the end of the year and equates to £2.57 per share. The balance sheet is also underpinned by our property portfolio and following further investments in the half, the Group’s freehold and long-leasehold assets total £123.9 million, which is £1.59 per share.

As I mentioned earlier, we are highly cash generative and in the period, we had cash flows generated from operation of £40.1 million, £10 million of which came from our key working capital focus. We also have our £120 million revolving credit facility which is secured until May 2021.

So, as you can see, the Group’s balance sheet remains exceptionally strong and that leaves us well placed to take advantage of any potential opportunities that may arise.

Q3: Despite market conditions, Marshall Motor Holdings’ margins have held up well, could you talk about this?

At our results presentation in March, we highlighted a number of our premium brands who were adversely affected by not having the right mix of petrol cars. During the period, as anticipated, we saw a number of our brands adjusting the balance between diesel and petrol which allows for better matching the availability to demand.

In addition to this, we worked closely with our brand partners to negotiate the right targets and we retailed to those targets, this minimises the need to pre-register and has enabled us to maximise bonus earnings.

Like-for-like profit in the used segment was down 2.5% to £32.8 million driven by some RV pressures in the market. Whilst our used car margins were down 62 basis points to 6.6%, we were able to contain the margin pressures through our continued focus on our proven 56-day stocking policy.

Aftersales like-for-like gross profit was down 0.6% to £56.5 million and we did experience some margin pressures, largely as a result of an increasing mix of part sales which was up 4.5% which has a lower margin attributed to it as well as some ongoing cost pressures. Within the aftersales number, pleasingly servicing revenues increased by £1.1 million which equated to 2% like-for-like growth and margins remain broadly flat.

What I think this demonstrates is the resilience of our business model through the cycle and the movements you typically see between each of our segments.

Q4 Finally, Daksh, what’s the outlook for the remainder of the year and beyond for Marshall Motor Holdings?

A4: At the end of July, the new car market was down 3.5%, however the latest SMMT forecast for the full year of 2019 is a decline of 2.2% which indicates that the final 5 months  of the year are expected to be broadly flat.

It’s worth remembering that September last year was affected by supply constraints caused by WLTP and was down 20.5%. September will see the instruction of WLTP to commercial vehicles which coincides with the introduction of the Real Driving Emissions test of passenger vehicles which WLTP introduced last year. At this stage, we are aware that certain brands will be affected in terms of supply but it’s too early to form any conclusions as to the extent.

In terms of the used car market, it’s forecast to decline 2% this year and for us, September will be a key underpinning for the full year result and whilst still early, our order bank for September is building in line with expectations.

Beyond that, given the wider political and economic uncertainty, the Board believes it’s right to remain cautious, however the outlook for the full year remains unchanged.

Longer term, the market will continue to consolidate and we feel we our people-focussed culture, strong balance sheet and OEM relationships, we believe we are very well positioned to go further. However, we will only do so where it makes strategic sense for our business and financial sense for our shareholders.

Receive our exclusive interviews – Enter your email to stay up to date.
Share this post using our forum friendly shortlink: http://bit.ly/2N6do66
Disclaimer: Statements in this article should not be considered investment advice, which is best sought directly from a qualified professional.

MMH 2019-08-15
Amilia Stone
Previous: Why are management skills important in the modern workplace?
Next: This is how much it now costs to buy a property in your area

The intersectionality of women in automotive – what is it and why should we care?

Used car values rise in July for first time since 2009