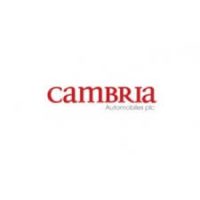 We note the pre-close update released this morning by Cambria Automobiles (LON:CAMB), confirming that trading in the first five months has been ahead of last year. On the back of the 5-month performance we are comfortable with our full year expectations. We anticipate the trading backdrop to remain tough but remain confident in the medium-term investment case. A lot of operational progress was made in 2018, and the Group has a strong balance sheet and is well positioned to deliver shareholder value in our view.

Pre-close update: Cambria has trading in the first five months has been ahead of last year. On the back of this we are comfortable with our full year expectations. As previously highlighted, Cambria has added six new franchise developments during the calendar year of 2018 (two Bentley, two Lamborghini, one McLaren and one Peugeot) as well as closing loss making sites to make way for this, which fundamentally shifts its portfolio towards the Premium/Luxury segment of the market. The completion of the Aston Martin and McLaren facilities in Hatfield is progressing, albeit this is slightly behind schedule with occupation now timetabled for early April to avoid disruption in the key March period.

Key performance drivers: In the five-month period, the new car market was -10% with diesel registrations bearing the brunt and -30% on the same basis. Supply pressures from OEMs as previously flagged also impacted performance, albeit Cambria was able to offset this by improving its gross profit per unit mix. New vehicle unit sales were -23.2% (LFL -19.5%), although the prior year comparatives did include a low margin commercial deal that did not repeat. New vehicle sales to private customers were -11% on a LFL basis. Used continues to perform well with total unit sales -11.2% and -3.8% on a LFL basis, with gross profit per unit seeing ongoing improvements. Profitability in used cars is therefore expected to be ahead YOY, which is impressive given the significant changes to portfolio mix and closure of Blackburn site in the prior year. Aftersales also continued to deliver a strong performance with revenues +2.6% on a LFL basis with gross profit +2.1% YOY on the same basis.

Forecasts: The Board remains cautious on current trading in light of the uncertainty around the consumer and Brexit. However, based on its performance for the first five months of the year, we have pencilled in a H1 adjusted PBT of £5.3m vs. £4.8m with FY forecasts flat YOY. Clearly trading in March is a key delta, but we are maintaining our forecasts ahead of this and will reassess the impact of March trading ahead of Cambria announcing its H1 results on 9 May.

Investment view: We remain confident in the Cambria story longer term, and believe it remains well positioned to deliver £1bn+ of revenue over the medium term. As we are seeing across the sector at present, near term valuation multiples are depressed, and the current market capitalisation of the Group remains at odds with the >£80m invested freehold asset base. Management are aligned with the shareholder base, with significant shareholdings, and are well positioned to continue to deliver value. The changes to the portfolio as they mature should be exciting in our view.

Receive our exclusive interviews – Enter your email to stay up to date.
Share this post using our forum friendly shortlink: http://bit.ly/2H43Nuh
Disclaimer: Statements in this article should not be considered investment advice, which is best sought directly from a qualified professional.