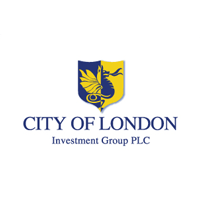 City of London Investment Group PLC (LON:CLIG) is the topic of conversation when Zeus Capital’s Research Analyst Robin Savage caught up with DirectorsTalk for an exclusive interview.

Q1: You have published a research note on City of London Investment Group 8 days after its year end, 30th June, and 8 days before management makes its detailed pre-close statement. Why have you published a note before the statement?

A1: At the end of last week CLIG published its group FUM on its website. We observe

This FUM supports comments management made on 16 April in its IMS, notably

Q2: What is the outlook for next year?

A2: We will update our P&L forecasts when CLIG’s management and Board have published their view of the outlook on:

a) The “mix” of net inflows and FUM

b) The state of the current “pipeline” on new FUM

Obviously, Sterling weakness will continue to be positive for CLIG which generates substantial non-Sterling revenues

CLIG has a strong capital position, with over £18m of net cash, which suggests that CLIG can continue to make generous payments to shareholders

d) In February 2019 CLIG Board declared a 13p special dividend which is around £3.3m

Q3: At 420p, the CLIG shares are up 6.1% since 31st March.  How do you see City of London Investment Group shares trading over the next few months and years?

A3: Over the past 5 years, CLIG has delivered its shareholders an attractive and reliable dividend stream generated by a leading Emerging Market investment manager.

CLIG has also been organically developing a track record in non-emerging market strategies. Its non-emerging market FUM has now reached nearly US$ 1bn … this is a level where many asset allocators, who have been tracking CLIG’s performance, may start allocating new funds.

In our opinion, CLIG current share price reflects the current level of Emerging Markets BUT NOT

a) The growth of Non-Emerging Market FUM, which has developed an impressive track record over the past 5 years

Receive our exclusive interviews – Enter your email to stay up to date.
Share this post using our forum friendly shortlink: http://bit.ly/2G2SbFO
Disclaimer: Statements in this article should not be considered investment advice, which is best sought directly from a qualified professional.

Click the EPIC CLIG Zeus to read the full archive for this company.